Entering Exeter Phoenix’s Workshop, we find protagonist Angus (Josh Smith) sprawled on a mattress, surrounded by marks of decay and neglect. In his litter of crushed beer cans, empty wrappers and cigarette packets, it’s easy to see that this is a man who’s not doing well. Yet Angus is much less capable of admitting this to himself. On this journey towards acceptance, writers and directors Constance McCaig and Eva Lily have shaped a compelling narrative that bravely faces drug-culture, mental health, and the difficulties of youth, delving into these complex themes with fierce honesty and intensity.
END_OF_DOCUMENT_TOKEN_TO_BE_REPLACED 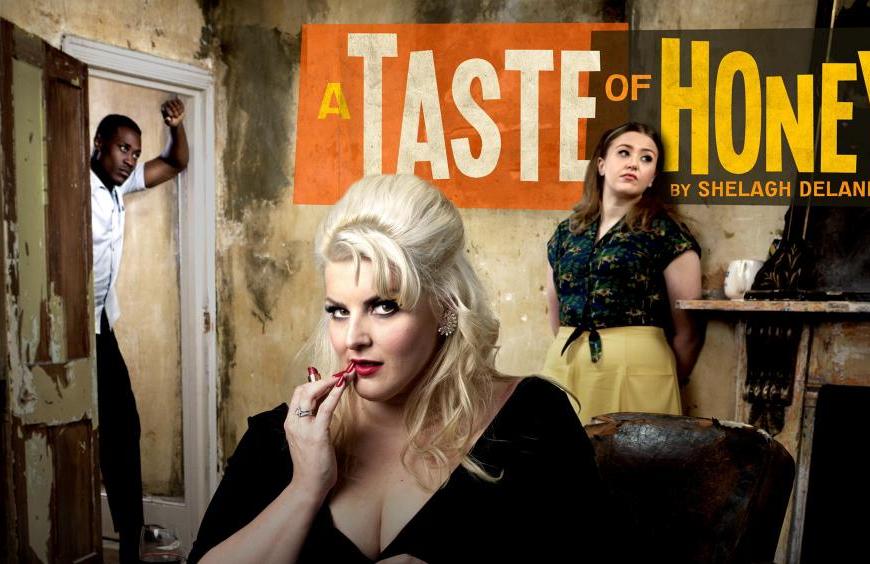 A Taste of Honey, Shelagh Delaney’s debut play (written when she was just 19 years old), proves that being a product of its time does not stop art from being important to contemporary audiences. Bijan Sheibani’s current touring production, for the National Theatre and showing at Trafalgar Studios in London this holiday season, only serves to reiterate this point. When the play premiered at the Theatre Royal Stratford East in 1958, it was considered part of the post-war ‘kitchen sink’ genre because of how it revolutionised British theatre by questioning class, race, gender and sexuality in mid-20th century Britain. END_OF_DOCUMENT_TOKEN_TO_BE_REPLACED

Until recently, all that I knew about the plot of Shakespeare’s The Taming of the Shrew was what I had seen in 10 Things I Hate About You: the frosty, hostile Kat Stratford (Julia Stiles) softens when she accidentally falls for the slightly intimidating Patrick Verona (Heath Ledger). On my way to London, to see this production I felt reasonably excited by the prospect of watching the original play. The idea of going to see a performance at the Barbican over the Christmas period sounds enticing – especially when it is to watch something as cultured as a Shakespeare play. Little did I know that I would not be so pleased afterwards. END_OF_DOCUMENT_TOKEN_TO_BE_REPLACED A delightful, magical, and charming rendition of the timeless children’s book to warm every audience member’s heart this festive season.

When I went to see Quirk Theatre’s adaptation of Margery Williams’ classic children’s book, The Velveteen Rabbit, I must admit that I was dubious and had a few questions. In particular, how was this cast going to convey and embody the actions and emotions of a stuffed rabbit? However, Quirk Theatre quashed all my doubts and left me yearning to re-read the charming children’s book in order to re-live their heartwarming production of the story.  END_OF_DOCUMENT_TOKEN_TO_BE_REPLACED

Substance and Shadow Theatre are an Exeter-based theatre company with a propensity for horror and history, shown in their most recent production, Walking with God. An immersive and creepy original play, the show demonstrates the company’s inventive and unique nature, which perfectly suits the darker side of Exeter’s past.

Performed in St Nicholas Priory, the eerie ex-monastery gave a ghostly edge to their dark piece on Jack the Ripper, and with a large portion of the action set in Exeter Digby Mental Asylum, Substance and Shadow convincingly brought the London murders to its Devon audience. Even upon entering the building through Exeter’s darker alleyways, it felt as though we were transported to the labyrinth of 19th Century Whitechapel. Their choice of venue and aptly decorated, candle-lit scene perfectly combined with the immersive nature of their theatre, culminating in a time-travel experience to Victorian London/Exeter.
END_OF_DOCUMENT_TOKEN_TO_BE_REPLACED

Ballet Cymru, led by artistic director Darius James (OBE), claims to do things a bit differently. If we are to judge by this revival tour of their 2013 ballet Romeo a Juliet, choreographed by him and assistant artistic director Amy Doughty, that statement is indeed true. I applaud the moves towards inclusivity, which feel genuine and never tokenistic. To have a female dancer portraying Benvolio and Friar Lawrence, as well as a wheelchair-using dancer (Joe Powell-Main) in ballet are mention-worthy. It would have been wonderful to see Powell-Main featured even more prominently, but this inclusion is definitely the move in the right direction for ballet and dance in general. END_OF_DOCUMENT_TOKEN_TO_BE_REPLACED

Fresh, dynamic and bursting with life, Matthew Bourne’s Romeo and Juliet is an electric reimagining of a classic tale. END_OF_DOCUMENT_TOKEN_TO_BE_REPLACED