Richard Alston has been at the forefront of contemporary ballet for decades and this, his final tour, serves as a reminder of the choreographer’s opus and reach. His training with Merce Cunningham and subsequent work as director of world-renowned Ballet Rambert has had an immeasurable effect on the contemporary dance scene and environment. The evening’s programme presented four competent, moving, complex and beautiful pieces.

We were treated first to Voices and Light Footsteps, which finds images of flowing line and courtship in Monteverdi’s madrigals. The emulation of Italian renaissance dances brings the music to life, though the focus on moves which ground the dancers, with only a few lifts and leaps, makes for a slow and heavy feeling start to the proceedings.

Alston’s most recent work Shine On, based on the operatic song cycle On This Island by Benjamin Britten, was not able to be performed. We were informed by Alston himself that the singer Katherine Mcindoe, who was scheduled to accompany the dancers with live vocals, was ill. What we received instead was Alston’s short piece to Chopin’s music about the composer’s relationship with both his friend and his homeland of Poland. The score is full to the brim with gentle and airy motifs, as well as rich and deep melodic moments, and the piece utilises these while simultaneously building on them. Excellent work by the two featured dancers in tweed-like vests and trousers evocative of the 1840s setting. Simple, emotional and interconnected.

Martin Lawrence, the company’s Associate Choreographer, created the piece A Far Cry to the music of Edward Elgar. This explosive and deeply energetic work is performed with utmost focus, achieving near perfection. The piece is challenging due to its tempo, but the company of nine exceptional dancers really present what quality contemporary ballet influenced by stunning music could look like. High leaps and lifts, repetition and a complex interchange between solos, duets and group sections make for a jaw-dropping triumph of endurance and class. 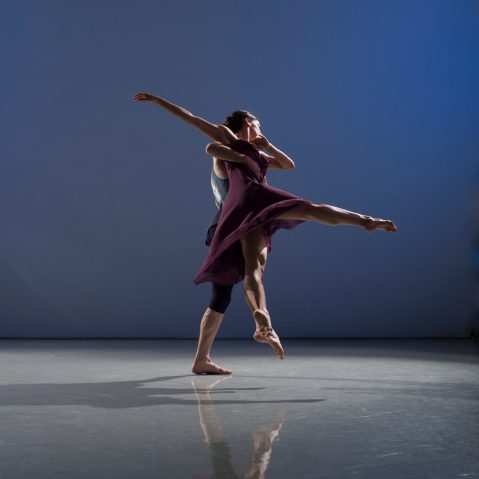 Brahms Hungarian dances, a popular piece to round off the evening, has performers cutting through the air in linear staccato movement inspired by Brahms’ work, emulating the way traditional sounds of dances, such as the czardas, cut through the aural space. Elements of traditional folklore, presented through the brown flower-embroidered costumes, help evoke a nostalgic and familiar tone to a piece which works, as Alston himself often does, on the cross-section of tradition and modernity.

What struck me especially, perhaps in relation to the performance’s proximity to the UK’s departure from the EU, is the work’s innate Europeanness. Alston works from and with the music, painting a moving image with the dancers’ bodies to the music of European greats such as Brahms, Chopin, Monteverdi. Further, ballet as a form has an unavoidable connection to the Continent. The choice to present these pieces perhaps indicates Alston’s idea that music and dance, working together, send a message.

Overall, the mood of the evening was celebratory and retrospective. The tone wasn’t overly melancholic, rather the pieces worked together to remind the audience of the magnitude of work Richard Alston has created. We are very lucky that the Exeter Northcott continually brings such world-class dance companies to our campus and city, and the knowledge of this privilege is evident in the ticket demand for productions like this. Here’s hoping for many more evenings of sold-out contemporary ballet shows.