Mince pies might seem too much of a faff to bother making at home, but once you can make shortcrust pastry they are actually rather simple. They will also be far better than even the fancier shop-bought ones, which tend to have overly sweet crumbly pastry more akin to shortbread than pastry. Plus, the dried fruit in mincemeat clearly counts as one of your five a day, right?

Home-made pastry is vital to good mince pies, and while home-made mincemeat is delicious and gives you a chance to make it just to your taste, using shop-bought works perfectly well.

Ideally go for shop-bought mincemeat without too much apple in, as some of the cheaper ones end up tasting more like apple pies than anything else. Nearly all mincemeat (even home-made) can be improved with a large glug of brandy and a few extra spices of your liking (I tend to add nutmeg and allspice). Any dark spirit works in place of brandy – and even more adventurous booze can give brilliant results. A mixture of a dry gin and Cointreau produces deliciously citrusy pies – as a general rule if you can imagine drinking something in a Christmas cocktail, it will work in a mince pie!

Mincemeat ~ 200g (This will depend on the size of your pies, which is set by your tray).

1) Rub the cold fat into flour and salt, until the mixture looks somewhat like breadcrumbs – ensure there are no more lumps of fat. Add the water – it is better to under-do it at first – and work the mixture into a firm dough. Cover the dough and chill for half an hour to rest. This helps to keep the fat cold, so the pastry does not get overly greasy, and lets the gluten relax. 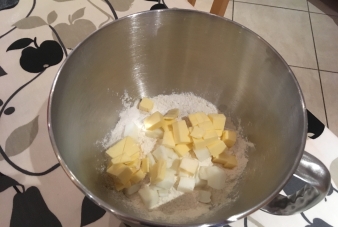 2) Once rested, roll the pastry out on a lightly floured surface until about 1.5 mm thick. This is best done in quite a cold room (so a student house should work perfectly). Cut bases and lids using a cutter (or glass) a little larger than the size of the tray for the bases, and the same size for the lids (trial and error is the best way to work out what size works best).

3) Then lightly grease the tray and place the bases in, top with about a teaspoon of mincemeat (too little and they will be all pastry but too much and they will leak). It is important to keep them from leaking as much as possible as leaked mincemeat will burn and turn bitter.

4) Having cut the lids (sized to just cover the pies) brush them with milk and firmly push them into place, making sure to avoid air gaps and creating a tight seal between the pastry base and lid. Brush the tops of the pies with more milk and cut small slits in the top of each one to let the steam out. Place into a preheated oven at 200˚C for about 12 minutes or until the pastry is golden.

5) It is best to transfer the pies out of their tray quickly because when they cool they tend to stick more, especially as any leaked mincemeat will have caramelised and sets hard when cold. They are best eaten when still slightly warm, and you may find that the 24 you have made suddenly seem to have disappeared.