Wickedly fun production we were lucky to slither-in to.

On the first day of term for University of Exeter students, Laura Elmes Production treated us to a nostalgic return to the beloved world of Harry Potter. We find a teenage Tom Riddle, played with excellent comedic timing and stellar voice by Steve Graney, facing some of the same woes as the freshers at the University: love, fame, world domination and fascination with snakes. You know, the usual teenage stuff. The year is 1942 and the production starts off by making it painfully obvious that Nazis are in power, but asks us to ignore that and instead focus on teenage Voldemort, his classmates and Hufflepuff girlfriend obsessed with baked goods, called Muffin Rows, played with adorableness and grace by Alice Robinson.

This 60-minute magical experience starts with a bang. What follows is a mix of wacky plot and stand-alone moments, a few panto-esque breaks of the fourth wall, and meta-theatrical comedy. Some examples of this include a pervy portrait solo, magical battle of the bands’ competition, an unexpected but delightful cameo from a Potter, Weasley and Granger, bisexual Moaning Myrtle and cursed ukulele strings. I was a fan.

The strong characterisation and exceptional singing, including glorious harmonies and a touching opera moment, sometimes overpowered the movement and choreography. But you don’t come into this show expecting Singin’ in the Rain. This is much sassier and brassier, rougher and tougher than that. I and the sold-out Phoenix audience loved every minute. 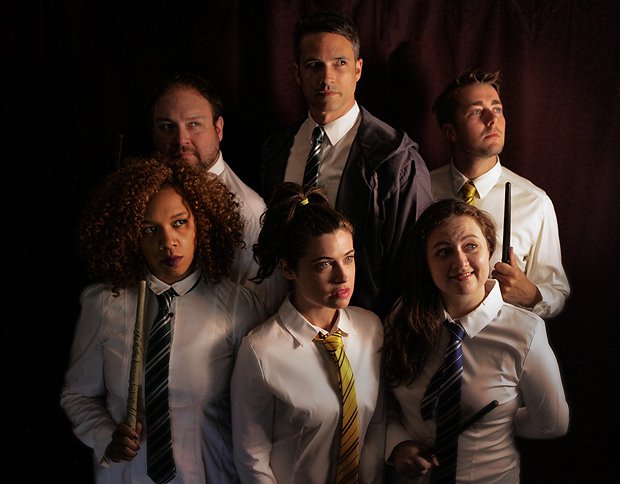 Voldemort and the Teenage Hogwarts Musical Parody featured an effective set and delightfully symbolic costumes, yet the relative minimalism of both meant that the show relied on raw talent and energy. Luckily, there was plenty all around in the seven talented performers. Stefani Ariza portrayed an instantly recognisable, yet multi-layered Myrtle. Brendan Matthew was as fabulous as he was dirty in his role as Dumbledore, making us scream with laughter. Eric Michaud was a touching Hagrid with an incredible voice and Katarina Hardy was the meanest, insecure Gryffindor you love to hate. Tim Murray, playing Derald Bacon, a Hufflepuff-obsessed with cake, successfully portrayed the many facets to the character, integral to the plot. Chris Grace directed this madness with evident precision, not an easy task I am sure. I applaud the overall tempo, though some of the diction and delivery could be slightly more precise for a show where dialogue is everything.

The humour and stand-out songs are something we have come to expect from the people who brought us Thrones! The Musical. Though Game of Thrones makes for a solid base to parody, with its devoted fans, immeasurable deaths, destruction and sex scenes, the sheer cultural capital of the Harry Potter franchise, with its books, films, spin-offs, games and play, means there are heaps of common tropes to ridicule, all with love, of course. You could say I am familiar with the source material, if by familiar you mean I own several editions of the original series, have seen the films numerous times, have the phone game and fall asleep to Stephen Fry’s audiobook version of the books every night. However, whatever ‘level’ of fan you may be, this show will connect with you. A ‘potterhead’ who’s just seen the films would love it as much as someone who cosplays as one of the characters. This show, its humour and plot, is so incredibly original. Some of the punchlines came out of nowhere and did just that – punched you in the face. And it was awesome.

The show has accolades to prove its value. It played Edinburgh Fringe and even ran successfully at the Upright Citizens Brigade Theatre in Los Angeles. It deserves all the praise coming its way and more. It is a guide to any aspiring theatre company wanting to do a fringe black-box type show. The audience reactions built up as the plot thickened and the gripping and hilarious performance was over in a flash. Nothing better to kick off a new academic year.

The performance at Exeter rounds up their tour of this show, but look out for the names of the creators, Zach Reino and Chris Grace, in the future – you will be in for a fun, cheerful and, at times, deeply emotional show, regardless of which cultural phenomenon they choose to parody next.

Follow RAZZ on WordPress.com
This Wednesday RAZZ will be hosting a collaborative Book Club Event with LGBTQ+ Society in celebration of Pride Week- come along to share your favourite books and leave with some new recommendations!
In this interview, @caitfrom5to7 talks to artist Sanya Fardaraghi about her art, influences, and lockdown!
Next highlight is an ‘it’s debatable’ about the commodification of the body positivity movement! Words by @msvibhuti and @__aimeefisher
Our first spotlight is about ‘situationships’ and how they can be defined at this tricky point in our lives! Words by @char.lotte_weston and illustrations by @_emmafry @emmafryart
Thanks to everyone who contributed to our RAZZ Print Magazine Edition No. 30 ‘Definition’. Out tomorrow 5 March at 12pm!
On the 9th March at 7pm RAZZ will be hosting a Q&A event with Daisy Griffith, who is head of TV and online news for BBC South West! If anyone has any questions they would like to ask her please message this page, or alternatively there will be an opportunity to ask questions in the live chat during the talk.
My Tweets
Loading Comments...
Comment
×
<span>%d</span> bloggers like this: