Recently, I spent a few days on holiday with my boyfriend in Dublin. It was the first time either of us had been abroad without any kind of responsible adults, and we’d opted to take three trains and a ferry rather than fly. Our journey there was long, complete with an overnight stop in Holyhead, but once we got off the shuttle bus in the centre of Dublin, we finally started to relax and enjoy the holiday. The first thing we saw on the other side of the River Liffey was a giant silver tanker truck with a huge Guinness logo on the side. Only in Ireland…

We spent our holiday in a fairly literary manner, which is to be expected given that we’re both English students and my boyfriend is a James Joyce fan. One morning we woke up to a beautiful sunny day, and decided we would be brave and travel from Dublin out to Sandycove, the location of the James Joyce Tower and Museum, an old Martello Tower that was originally built to defend Ireland against a potential Napoleonic invasion. This particular Martello Tower, however, has a very interesting literary history: a small group of writers, including Joyce, actually lived in the tower for a period, though Joyce stayed for only six nights in 1904, and left the tower after being scared out by the others.

At the tower, we were greeted by some very friendly women who volunteered there; they explained to us the tower’s history, and introduced us to some of the artefacts in the museum. We spent a very enjoyable hour or so exploring the tower, which was a lot smaller than it looked from the outside, and featured some extremely narrow spiral staircases! The best bit of the tower for me was the top, which boasted an absolutely beautiful view of Sandycove. We passed quite a lot of time at the top of the tower, taking in the views and the lovely weather, before we finally left, and headed back to Dublin.

Another highlight of the trip was our first full day, which we spent wandering around the city, visiting some of Dublin’s most iconic sights and searching out some amazing vegan donuts; Dublin seems to have a donut shop on every street — the opposite of a problem! We managed to see Dublin castle, which was a bit of a disappointment as it wasn’t the traditional medieval castle I expected to find, but was built mostly in the 1700s. It looked more like a palace than a castle, especially in the courtyard area, but as we left, I realised that round the back was a part that looked more like a traditional castle, painted in bright colours. Much more like it.

We also took a walk through St Stephen’s Green, and read about the Easter Rising of 1916 from the various information boards throughout the park, and had a nice browse in the National Gallery of Ireland. Sadly, much of the building was closed for renovations, but there were still two galleries open to the public that we perused, we especially enjoyed the Nathaniel Hone: Travels of a Landscape Artist exhibition.

The other high point of our trip that really deserves a mention was the food we ate. We became regular patrons of the Rolling Donut, a small chain with a few stores across the city, and really enjoyed meals in some speciality vegan restaurants, namely Veginity, Sova Vegan Butcher and Vish (a vegan ‘fish’ and chip shop, owned by the same people as Veginity). On our last day, the man serving us in Vish told us about several other restaurants that we wanted to go to – anyone else fancy eating in a restaurant-bar-arcade? We also had some drinks in a pub called The Hairy Lemon, solely because I found the name entertaining. 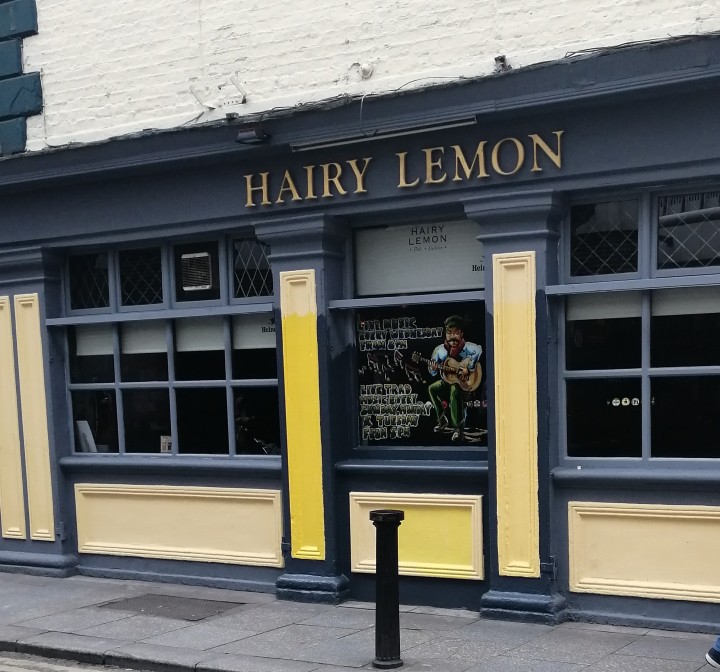 Overall, the trip was a definite hit, and with the exception of our first evening and the afternoon of our last day, we were lucky enough to be blessed with good weather, which is certainly not guaranteed when holidaying in Ireland. I’d especially recommend Dublin for young people looking to take a holiday abroad but who want to avoid the stress of travelling  somewhere with a completely unfamiliar culture and language. We felt like Dublin was different enough to feel as though we were abroad, while similar enough that we felt at ease navigating the city. Dublin, I can’t wait to visit you again!

All originals photos within article

Follow RAZZ on WordPress.com
In this interview, @caitfrom5to7 talks to artist Sanya Fardaraghi about her art, influences, and lockdown!
Next highlight is an ‘it’s debatable’ about the commodification of the body positivity movement! Words by @msvibhuti and @__aimeefisher
Our first spotlight is about ‘situationships’ and how they can be defined at this tricky point in our lives! Words by @char.lotte_weston and illustrations by @_emmafry @emmafryart
Thanks to everyone who contributed to our RAZZ Print Magazine Edition No. 30 ‘Definition’. Out tomorrow 5 March at 12pm!
On the 9th March at 7pm RAZZ will be hosting a Q&A event with Daisy Griffith, who is head of TV and online news for BBC South West! If anyone has any questions they would like to ask her please message this page, or alternatively there will be an opportunity to ask questions in the live chat during the talk.
RAZZ’s annual SHAG (Sexual Health Awareness and Guidance) Week will be taking place from Monday 8th to Sunday 14th of February! On Thursday 11th at 7pm we are hosting a collaborative Kahoot social with LGBTQ+ Society, we hope to see you there! More details to follow or message us any questions...
My Tweets
Loading Comments...
Comment
×
%d bloggers like this: