Rita, Sue & Bob Too, playing at the Northcott theatre, tells the story of Rita (Alyce Liburd) and Sue (Gemma Dobson), two 15-year-old girls living in Bradford in 80’s Britain, who are sexually pursued by an older, married man that they babysit for. The show examines gender relations that seem prevalent in our current #MeToo climate where powerful men take advantage of young women. While the play managed to portray two lovable protagonists, the vital conversations around sexual abuse fell silent.

For the transitions between scenes, the stage flooded in blue light and excerpts from slowed down 80s pop classics played out to the audience. While Human League dragged its way to our ears, the minimal set of just four reclining chairs moved around to change location: from a late-night car ride to a living room on a council estate. These transitions pointed to a dark underbelly of the play – one that exposes the reality of Thatcher’s Britain where job security was an ever-looming threat and gender relations strained in a “nowt to do” town. 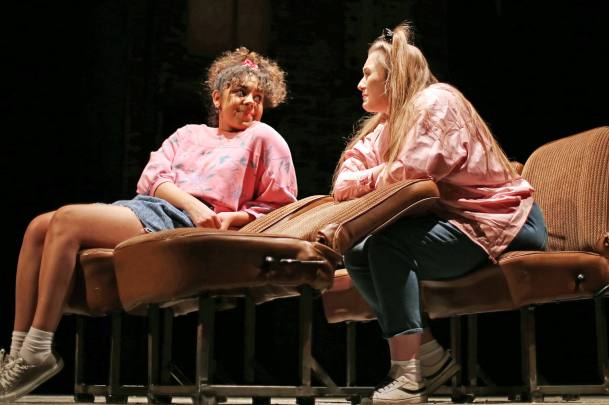 While these struggles were alluded to, the play never fully explored these tensions. The play seemed to be preoccupied with comic delivery, accentuating them so that they didn’t provide a welcome enough contrast to the uncomfortable social commentaries available. The punchlines generally weren’t interplayed well with the tense moments, performed instead as back-and-forth banter between characters rather than interjections to jar a distressing situation. The comedy of Rita and Sue provisionally presented their naivety and immaturity that would have helped to remind the audience of their age, and therefore the power dynamics between them and Bob (the older married man). Instead though, the punchlines were forced to the forefront of the scenes to garner a laugh, but in turn mitigated the reality of statutory rape.

The more vulnerable moments weren’t completely lost though. Alyce Liburd gave a stand-out performance as Rita, confessing her feelings of jealousy, infatuation, and discomfort that managed to call into question the actions of Bob (John Askew) more so than any other moment of the play. While in the arms of Bob, admitting that sometimes she feels that what they’re doing is wrong, Rita reminds everyone that she is still so young. 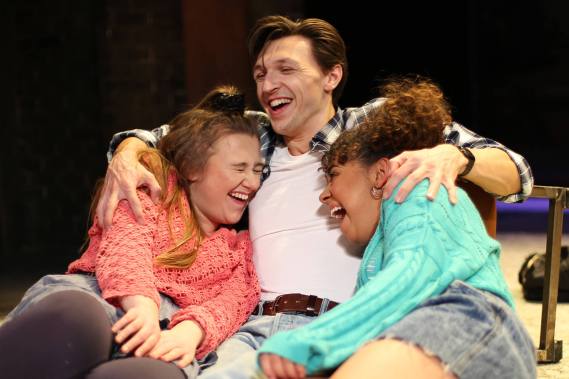 Similarly, the other women provided much-needed tenderness to the show. When Michelle (Samantha Robinson) choked up realising that her husband’s relationship with the babysitters was far from innocent, and when Mum (Susan Mitchell) tries to warn Sue about not practicing safe sex, we saw a convergence of the generations that puts the unifying experiences of women in a confronting light.

These moments were a necessity that evoked the most emotion from the audience. However, they were few and far between and not fully developed, lasting only briefly before another transition of blue light douses the stage. Considering that it is just a 75-minute production, comedy is prioritised above the vulnerability due to the restricted timings. However, a play like this needs to have hard-hitting rawness and sensitive compassion for such an important story concept. A narrative that examines themes of capacity for consent and Thatcher’s Britain not only has the potential for a brilliant case study of the time, but also as a timeless tale that proves prevalent for a contemporary audience. When the performance chooses to push for laughs though and sacrifice developed characterisations and tensions, these themes lose their impact. 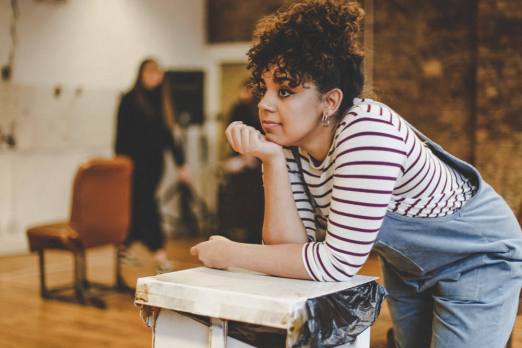 The play was enjoyable and gave a platform to the abilities of Donson and Liburd, but the production was ultimately under-cooked. The darkness of Thatcher’s Britain never fully reached the surface, instead simmering underneath and in-between while ‘Tainted Love’ took on a gloomy remix.

Rita, Sue and Bob Too continues to be performed at Exeter Northcott until Saturday 9th March