Molly Naylor’s play Lights! Planets! People!, which premiered at the Exeter Phoenix last night, weaves together the titular words in a surprising but congruent way in the character of Maggie Hill, a sixty-year old, gay, bipolar, space scientist. As Maggie (Karen Hill) tackles issues in both her work and personal life, the audience were gripped by Maggie’s progress towards greater self-realisation and acceptance.

Lights! Planets! People is shaped from three narrative threads; a lecture that Maggie is giving to inspire young women to pursue a scientific career, her first ever therapy session, and her voicemail messages to her ex-girlfriend who has stopped speaking to her. These different plot lines were each played out on a different area of the stage, with changes in lighting helping to mark the distinctions. However, these transitions weren’t always as smooth or as obvious as they could have been. To support the plot development, the play used pre-recorded voices to play the role of young women asking questions in the lecture and the voice of Maggie’s therapist. This was a clever way of forcing Maggie to question her perceptions of herself in a way that didn’t involve awkward soliloquies, which would have detracted significantly from the realism. 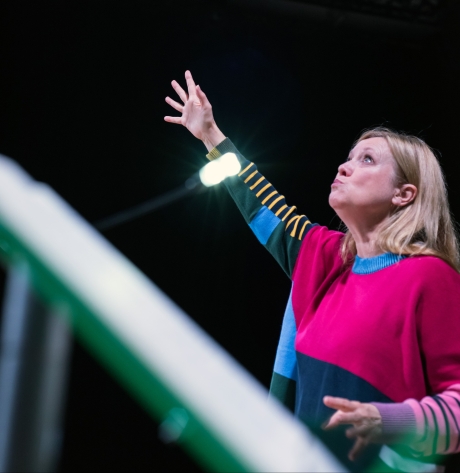 The portrayal of different elements of Maggie’s life allowed an insight into both her personal and work life. While they would seem to be distinct, as the narrative progresses, they begin to blur and it becomes clear that, as much as Maggie would like differently, she cannot detach the different areas of her life from each other. Naylor’s script crafted the differences between her work and personal personas. Under Naylor’s direction, Hill shifted skilfully between the more professional Maggie during the lecture to the fragmented, emotional dialogue of her messages to her ex-girlfriend. As the distinctions that Maggie had drawn for herself broke down, Naylor cleverly obscured the differences between the professional and personal characters, for instance with Maggie’s language in her lecture becoming more akin to the way she addresses her ex, with more expletives and less coherence. Karen’s performance created a realistic and engaging protagonist throughout, building on Naylor’s words with dexterous use of body language to highlight Maggie’s defensiveness and vulnerability, with a nervous tic of rubbing her thumb against her hand. The intimacy of Hill’s performance epitomised the power of one-woman theatre.

Lights! Planets! People! explores questions about identity and the way that work defines us in a modern world. Maggie is proud of her career in astronomy and attempts to separate what she seems to perceive as the ‘weakness’ of her mental illness from her working life. Hill portrayed Maggie’s defensive pride in her career in the stubborn tone of her responses to the therapy’s questions, with humorous retorts to any perceived criticism. Videos of rocket launches play on a screen behind Maggie during her attempted phone calls to her ex-girlfriend, ironically showing these, not during the scenes associated with her career, but in her most personal and revealing moments. This makes a powerful comment on the interconnectedness of life, and how all of the areas of Maggie’s life tie together to make her. 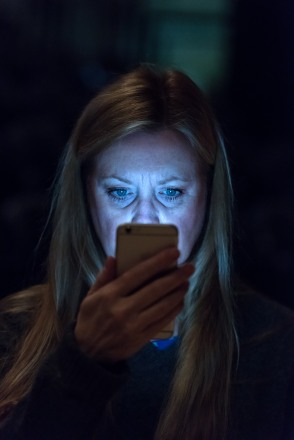 The theme of identity led onto ideas surrounding legacy, with Maggie discussing the relatable desire to leave something behind. This incentivises her to give lectures to young women, hoping that she will inspire other women to go into science and thus could feel pride in their discoveries. Ironically, while Maggie has always separated her personal life from her working world, in this case, it is maintaining a high-powered career despite the daily difficulties of living with a mental illness that end up inspiring a young woman. This poignantly suggests that mental illness isn’t a weakness, it is part of Maggie in the same way that her passion for astronomy is, and both have the power to leave a legacy behind. Karen Hill’s portrayal of this moment of self-realisation brought tears to my eyes.

Lights! Planets! People! offers a moving and sometimes humorous presentation of both the most personal moments and the greatest cosmic things that build our world. Naylor has written an empowering script that questions our approach on such differing themes of mental health and space, making us realise that they might have more in common than you’d think.