Scrolling through your newsfeed over the last two weeks, you’ll probably have seen a bit more hair than usual. Western beauty standards mean that our Instagrams are usually full of plucked brows, bare bikini lines and silky, smooth legs, but this January, Exeter Uni Student, Laura Jackson, is seeking to change that with her campaign Januhairy. I had a chat with Laura about Januhairy, which encourages women to grow out all their body hair for the month of January in support of the charity Body Gossip.

Laura told me that her inspiration for the campaign came from a production she did in May 2018; “it was about ideologies of being a woman and the absurd levels we go to, to try and reach that and to try and perfect ourselves into this stupid, fake way of being”. For her role in this one woman show, Laura consciously grew out her body hair for the first time. “I felt really uncomfortable and self-conscious at first when people started to see it, and I apologised to people when they saw my hair,” she said, “but then I asked myself why, and why I was apologising for this, why was I so ashamed to express my body in its natural form? And then after a little bit of time, I started to really embrace it and really really love it, and I came into myself and got so much more confident… I was finally accepting and loving something that I was so ashamed of having in the past.”With her campaign, Laura hopes to inspire similar confidence and self-love in other women, a true acceptance of their bodies, describing it as “an incentive for women to come together, with a big group of supporting women doing it together, to challenge themselves for the month of January”. 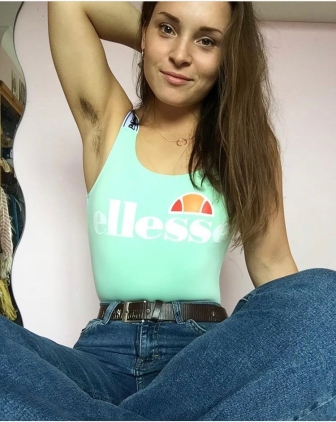 The wide publicity of Januhairy has meant that the campaign is well on its way to reaching its fundraising goal for Body Gossip, currently having raised (as of writing this article) £949 of their £1000 target. Laura said that when she discovered Body Gossip, she “thought it was absolutely amazing and I can’t believe I hadn’t heard of it already”. She described how money raised by Januhairy will go towards supporting their education programmes. “They go into schools and educate young minds between the ages of 13 and 18 on their body image and how they view themselves and from that, how they view other people. It’s so important in a school environment as well. That’s a time when you’re really trying to find yourself and comparing yourself to other people and you really care about what other people think of you”. Laura explained that many of the women she’d spoken to through Januhairy had cited school experiences as the beginning of their self-consciousness about body hair, making Body Gossip a perfect charity to match the ethos of Januhairy.

Laura’s own school experiences also influenced her perception of herself and her body hair: “I always felt like I had to [shave], like when we were doing swimming in school and high school, I’d have to shave and I’d be so scared about other people seeing it, especially like bikini lines… I remember I used to lie and say I was on my period so that I didn’t have to go swimming just because I didn’t have a chance to shave the night before”. She also remembers an incident in college “when my friend looked at and pointed out another girl’s armpits in my course… [she] said like, ‘oh my gosh’, because she had a bit of stubble, ‘look at that, that’s disgusting’ and I joined in and I remember judging her. And it just makes you think ‘wow, why are we judging each other on this?’, it’s insane and I can’t believe I did that, and I myself kept shaving away in my disgrace because I didn’t want to be judged in the way that I was judging other women.” With Januhairy, Laura hopes to question these judgemental attitudes, saying “it’s really important in this campaign to recognise how we view ourselves and how we view other people and with Body Gossip it just rings so true with their message as well, just starting to love ourselves in our innate way of being…I wish I had Body Gossip in my school come in and teach me to love myself… if I got taught to love myself during that time, maybe things would be a bit different.”

Despite the acceptance and understanding that Laura hopes to spread with Januhairy, there have unfortunately been some who’ve taken to social media to criticise the campaign. Piers Morgan thought that some people might care what he thought of Januhairy, labelling participants as “lazy” and “revolting” on Twitter and Good Morning Britain. I asked Laura how she felt about criticisms of the campaign. “If I could reply to every single comment on all these photos and articles, like negative people who don’t get it, I would,” she told me, “but I can’t and I do wish that they could open their minds a little bit and try and watch this space and look at some of the stories and just see that it’s a preference but, you shouldn’t judge other people’s opinions… I’ve heard a lot of ‘political correctness gone bad’ and about ‘the snowflake generation’… when you know, actually we’re just trying to challenge some things that have been embedded in our minds as being normal and I think change is good, change is great, and some people don’t see that.”

According to Laura, it’s not only internet trolls who don’t understand yet, but some of her friends and family too; “there were some people who were quite close to me who surprisingly didn’t understand it and asked me, these were women, asked me if I was being lazy or if I was trying to prove a point… we shouldn’t have to be either of those, why can’t we grow out our body hair and let it be as it is?”. Laura said she wishes that those who don’t understand her choice “could ask me about it because then I could talk to them about it and help them to understand.”

However, her choice to grow out her body hair has changed the perceptions of some of her friends. She told me about someone she was with over the summer who initially didn’t understand why she’d grown out her body hair but “when they started to see how confident it made me, and how I didn’t care about what other people thought of it, I think it just became a part of me and for them, I would say it became a lot more endearing in a person because you’re embracing that part of you… you can’t judge someone if they really don’t care about the judgement.”

Overwhelmingly, Laura’s focus seems to be on choice, and acceptance of yourself. While she is encouraging women to challenge themselves for January, she makes it clear that “we’re not saying shun the shavers, just make sure you’re doing it for you and that you ask yourself why… Make sure next time you decide to adapt to something with your body, consider the judgemental eyes in society, and ask yourself why and make sure you are doing it for you and nobody else.” For Laura, “it’s all about choice, we can shave, we can not shave, we can be natural, we can be trimmed, whatever we want is okay. We should feel accepted for whatever choice we want to make, and it shouldn’t be abnormal to see a woman’s body in its normal state.”

Best of luck to Laura for the rest of the campaign and hopefully, Januhairy will mean that our hairier newsfeeds will become a norm, not a surprise.

You can donate to Body Gossip through Januhairy here: