Rated one of the top 3 pubs in Exeter on Trip Advisor, and an unlikely destination for a take on arguably Shakespeare’s most famous comedy, I – having never been to the Hole In The Wall – walked in expecting to see a theatre-like stage and chairs. Instead I arrived to a small arrangement of rowed wooden seats and benches, from which an audience watched on a spot-lit and well-stocked bar; tables, chairs and stools are all haphazardly placed at the front of the mood-lit wooden-panelled room. The audience are chattering away over the fiddle folk tunes of the in-house band, the cast chat too, having assumed their characters ahead of curtain draw. This is a clever touch that, though unclear at first, added to the seamless transition into first line at the beginning of the performance.

The location and setting of the pub not only created an intimate and immersive atmosphere, but were also incorporated into the script of this adaptation. References to the “Landlady” of the pub in Devon paved the way for a ‘drawing-room play’ i.e. set in one room with the characters moving on and off the set into the audience or out of sight altogether. 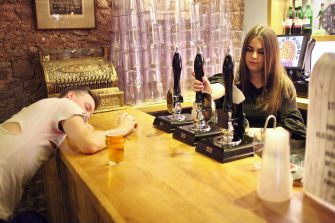 Breaking of the fourth wall allowed engagement of the actors who at times address the audience. Many may relate to such a play where unrequited love is the driving force. Briefly I attempt to summarise; Viola and Sebastian (brother and sister) are fresh off a shipwreck, and believe each other to be lost. Each thinking the other has drowned, they go about their lives with Viola masquerading as a man, Cesario, to acquire a kinsman role on the advice of her sea captain friend. Chaos ensues! Cesario is charged with the mission of messenger of love from his Master Orsino to Olivia the Landlady. Olivia’s misplaced love for Cesario are ill-received by an onlooker Sir Andrew and assistant Malvolio, both of whom have always had sights for Olivia. At this point she is only interested in… Cesario! Sebastian arrives in Devon with his close (close) friend, only to be mistaken for Viola meanwhile Cesario (Viola) develops eyes for Orsino (you’d be forgiven if you were lost!) But this is the humorous nature of the play: what begins as a love triangle quickly escalates into a love pentagon.

The cast bring an overall lightness to the play that only helps to maintain an amusing thread throughout. As the ‘Pot-stirrers’ of the narrative, Cousin Toby and Sir Andrew commit to an impressive state of drunkenness from beginning to end. With the help of Olivia’s lady Mary, they write a letter to trick Malvolio into believing that Olivia is in love with him. From his Yellow-stockings, nipple pasties and dashing smile to the crunch of crisps and settling orange-squash substituting for beer – the attention to detail on this set was astonishing. Arguably, Cesario/Viola realising that she may be mistaken for her brother whom she believes dead was one of the more complex  scenes. Though if the audience had not understood until this point, the grand reveal of a now married Mr Sebastian-Olivia next to his sister Viola makes for a sigh of relief in this fast pace comedy.

With a nod to the modern, this play becomes more engaging. Alongside the staccato violin melodies interspersed throughout dialogue, we had the drunken kinsmen dancing on tables chanting off-key “I would walk 500 miles!” by The Proclaimers, and Orsino himself singing the smoother “I want to know what love is” by Foreigner as Cesario returns, foreshadowing the love between the both of them.

A massive congratulations and a huge round-of-applause to the ShakeSoc team and the cast members for bringing such a unique take to the play. A truly enjoyable show!