My parents grew up in the cold war era, where the shadow of Hiroshima and Nagasaki hung closer and the threat of further use of nuclear weapons felt tangible. While the use of nuclear weapons is still a potential reality, heightened by the attitudes of certain leaders like Donald Trump and Kim Jong-Un, there is less of an everyday consciousness of it, less fear of those two fingers hovering over buttons in a timeless stalemate. For me, nuclear weapons were a topic taught in history, and once they were defined as history, they no longer seemed relevant. However, Faslane, performed at the Exeter Phoenix, made me reconsider the role of nuclear weapons and Trident in the modern-day world.

Faslane, written and performed by Jenna Watt, began by addressing the generational importance of nuclear weapons and the way that time has shaped our perception of them. The Einstein quote beginning the piece illustrated the extended period over which this debate has been ongoing ,and immediately highlighted its complexity since, even after all this time, popular opinion remains incredibly divided. Watt powerfully used the peace symbol; first addressing the younger audience members to see what they believed the symbol meant, and then the older members, who correctly identified it as the logo for the Campaign of Nuclear Disarmament. This was a powerful way to draw audience members into the debate, forcing us to consider if we had neglected the issue of nuclear weapons by idealistically reaching for a universal peace instead. The use of a soundscape of News sound bites also highlighted the relevance of the debate. The sound of well-known voices, like Theresa May’s, encouraged the audience to see that, if this is a debate discussed by all world leaders, it should be one that the public understand and engage with too.

Watt continued to interpret the nuclear debate from an interesting angle throughout the the piece, addressing it through a personal prism. Members of her family work at the nuclear base – Faslane, in Scotland – meaning that the ethics of nuclear weapons for her is interwoven with the personal benefit of employment for her family. Thus, while the piece was very informative about both sides of the debate, it avoided feeling like an academic lecture by discussing how familial connections shaped her view of Faslane. These were well illustrated by her narratives relating to visits to family members who work at Faslane and interactions with those on the opposing side of the debate, such as in the peace camp outside Faslane. The difficulty of representing these views in a monologue was combatted through Watt’s use of different physical stances for each of the individuals. While this was generally effective, the differentiation between these characters could perhaps had been made more visually clear.

However, sometimes the message was lost because I felt more drawn to the personal aspect than the nuclear debate. For example, I was more interested in why she hadn’t spoken to her uncle for years rather than his views on Trident. While using her personal connections was an intriguing way to explore the debate, it also had the effect of isolating the audience slightly. It made me wonder how I should approach it without any personal experiences to tie me to it.

Alternatively, it could be said that Watts tackled this problem in the piece. She relayed a number of different arguments about nuclear weapons with a hand-held microphone, standing on different areas of the stage to represent the different viewpoints. The way in which she presented these facts was artificial and emotionally unengaged, posing a sharp contrast to the discursive, intimate tone she used when telling anecdotes at other points in the show. To enhance the difference between the two different styles of the piece, sound was used to build intensity during these sequences, making the audience feel overwhelmed by the amplified facts. This powerfully seemed to demonstrate the difficulty of reaching a stance on nuclear weapons, especially because, by representing different arguments within a one-man show, Watts was effectively arguing with herself, as if mirroring an internal conflict. 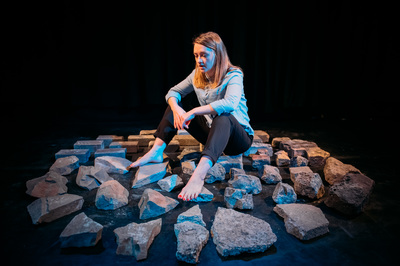 The set for Faslane was formed from a filled circle of rocks. The simplicity of this suited the piece well because it did not distract from the key focus on the monologue. The purpose of the rocks was a little confusing, but this might have been deliberate. When Watts walked across the rocks, her balance seemed to represent the precariousness of the issue, in that there is no fixed and easily defined stance. At another point, Watts walked around the circle of rocks, making them almost form a clock that represented the longevity of this debate. At other times, they seemed like a sacrificial circle, potentially symbolising the sacrifice of innocent civilians for the benefit of ending the Second World War. Therefore the ambiguity of the set made it powerful by allowing multiple conclusions to be drawn.

The true power of Faslane was that it presented both sides of the debate without the feeling that either perspective was being forced on the audience. It felt like Watt was merely encouraging people to consider nuclear weapons, rather than telling them how they should feel about them. Whether or not Faslane brought me closer to having a strong stance in the nuclear debate, it certainly made me realise that nuclear weapons are not just a history lesson.

One thought on “Review: Faslane by Jenna Watt”