As soon as I arrived in Edinburgh I was whisked from beneath the low grey clouds into a cosy and softly lit pub. This wasn’t your standard smelly local, however (I’m looking at you, Wetherspoons). The Brass Monkey had raspberry gin and tonics on offer, rather than 3 VKs for five pound. There was a special ‘cinema room’ at the back of the traditional pub, filled with monkey-themed movie memorabilia, mattresses and pillows to sprawl across. 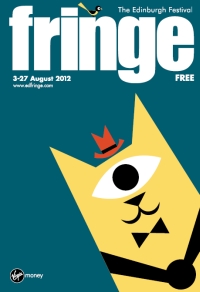 The first show we had lined up for the evening was a production of A Midsummer Night’s Dream, and honestly I was a litte disappointed. It sounded a little too serious after a few of those raspberry G & Ts. So of course I was thrilled to learn that this wasn’t any old production of Shakespeare, it was ‘Shitfaced Shakespeare‘. This particular performance of A Midsummer Night’s Dream was acted out by four professional actors, one of whom was, well… shitfaced. What made the show so comical was witnessing the pain of the three sober actors, as they attempted to remain stony faced and actually finish the play as their fellow thespian humiliated herself. Although I was initially skeptical of how drunk the actor would really be, after about five minutes of swaying, slurring and awkward flirting it soon became clear that she was indeed smashed. No, this performance was not intelligent, but it was a great way to spend a couple of hours after the pub.

Next up was a Hip Hop take on Shakespeare in the form of ‘Othello the Remix‘. In this retelling of the play, Othello is a rapper who heads up a crew with Iago and Cassio, his fellow b-boys. My first assumption about this production was that it was an embarrassing attempt to “get down with the kids”. So when the lights came up and four men dancing in dungarees sprang onto the stage, my thoughts were: ‘this could go very badly’. However, because Hip Hop is not used in this producution as a tool used to simply attract young people, it actually worked. Although this play was at times a little cheesy, it was clever. Not only did ‘Othello the Remix’ manage to  stay true to Hip Hop throughout, it stayed true to Shakespeare’s story, and this is what made it so intriguing. Every single line was rapped over a beat, often heavy with contemporary reference. For example, the ‘Tribe Called Quest’ lyrics “Relax yourself girl, please settle down” were recited by Cassio to a hysterical Bianca. The character of Desdemona was not played by an actor, but was instead represented by a pre-recorded soulful singing voice, which highlighted her detachment from Othello in a thoughtful way. In contrast to the previous night’s raucous laughter, this production had the audience giggling one moment, and gripped with suspense the next. Hip Hop actually complements the comic and tragic elements of Shakespeare very well well.

The rest of my trip in Edinburgh was full of equally memorable shows and performances, though they were not always memorable for the right reasons… Less brilliant moments included a free “comedy” show at the back of a pub during which a man spoke about his heart operation. He actually interrupted his set to ask me if I was bored. Another confusing moment of comedy took place at a show where a man in a ski suit jumped around a stage with a fake German accent, shrieking “Eat my powder!” to some lucky girls in the audience.

It was these surreal moments I witnessed, together with the countless fantastic performances I haven’t mentioned, that really made the Edinburgh Fringe Festival so incredible. I do not regret going to one show, because they were each so different and often hilarious (even if some were only funny in retrospect). The excitement of the Fringe is that you have no idea what you’re getting yourself into as you take your seat. If you want to enjoy anything you see at all, your only choice is to approach whatever is performed before you with some openness.

Follow RAZZ on WordPress.com
This years XMedia Ball will be going ahead on Friday 25th June at the Mercure Exeter Rougement Hotel! Tickets are £22.50, available to purchase through the student guild
In this interview, @caitfrom5to7 talks to artist Sanya Fardaraghi about her art, influences, and lockdown!
Next highlight is an ‘it’s debatable’ about the commodification of the body positivity movement! Words by @msvibhuti and @__aimeefisher
Our first spotlight is about ‘situationships’ and how they can be defined at this tricky point in our lives! Words by @char.lotte_weston and illustrations by @_emmafry @emmafryart
Thanks to everyone who contributed to our RAZZ Print Magazine Edition No. 30 ‘Definition’. Out tomorrow 5 March at 12pm!
On the 9th March at 7pm RAZZ will be hosting a Q&A event with Daisy Griffith, who is head of TV and online news for BBC South West! If anyone has any questions they would like to ask her please message this page, or alternatively there will be an opportunity to ask questions in the live chat during the talk.
My Tweets
%d bloggers like this: